Composing Myself for a Season in the Door

The 2019 Door Shakespeare season is right around the corner. This will be my third consecutive season with the company, so I like to pretend that I know something of what to expect in the coming months. In many companies, the run-up to first rehearsals is a familiar one: actioning the text, memorizing lines, and making choices that may or may not ever see the opening-night 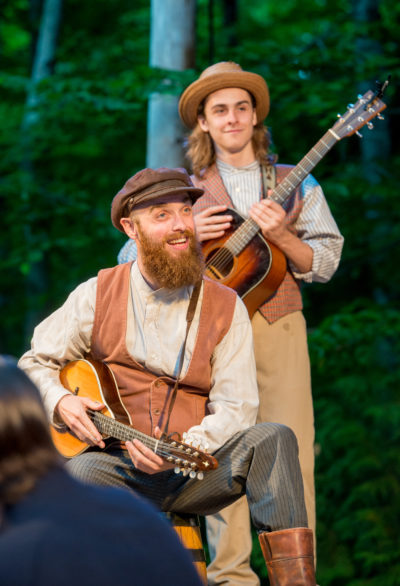 stage. My life at Door Shakespeare is a little bit different, since the company contracts me as both a performer and a composer/music designer. So, for me, the run-up to rehearsals does involve memorizing lines, but it also involves composing lyrics for other actors to memorize; it involves thinking about acting choices for my own corner of the plays, but it also involves conversations with brilliant directors about the plays in whole. For the most part, my life revolves around black moleskin notebooks and pencils that get ferried around town as I work through lyrics at the local Collectivo or chords by lake Mendota. Most of all, this time of year involves gratitude: gratitude for the work, and anticipation for the start.

Nothing about outdoor theatre is easy. Fortunately, working with Door Shakespeare provides both an ever-shifting set of musical composition challenges and a beautiful laboratory in which to confront them. Composing six very different shows across three seasons for a single company has inspired a precise focus on how music can support, inspire, and interrogate specific concepts and directorial visions. To achieve clear distinctions between multiple plays in one company’s repertory, I rely on a combination of academic research in my pre-production composition and radical flexibility in tweaking and re-working material alongside a company of actor-musicians. In this way, Door Shakespeare has provided an ideal incubator for my developing aesthetic and methods as a composer, lyricist, and music director.

As a PhD candidate at UW-Madison, I love to incorporate research into my composition work. This passion was front and center in Joe Hanreddy’s Much Ado About Nothing (2018), as he generously invited me to make music to help transport his audience very specifically to 1860s Wisconsin. For that project, I chose to dig dramaturgically into cornerstone Wisconsin folklore research by James P. Leary in order to understand the music that Wisconsinites might have made and listened to in that era. Based on this research, I developed all new lyrics and score for the production, shaping my work around the forms and tropes found in archival materials from 19th century Wisconsin lumber camps. The research apparently paid off, as Mike Fisher of the Milwaukee Journal Sentinel observed that “much of the music suggests the yearning – for love and a better, less divisive world – evident in so many of the songs popular during the Civil War, as lost souls longed for home” (“A Heroine Shines”). In 2017, I took a similar dramaturgical approach, using source material from both Howard Pyle’s Robin Hood stories and 17th century English ballads in order to lend environmental authenticity to new music for Shanara Gabrielle’s production of David Farr’s The Heart of Robin Hood. In each event, Door Shakespeare invited me to leverage my scholarly experience as a PhD candidate into immediate new music that complimented play texts in performance.

I frequently tell my fellow actor-musicians that it is my job to have the first idea in the rehearsal room, but our job to put the best idea onstage. Working within a tightly-knit company of 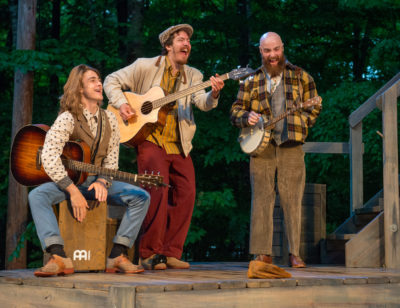 talented actor-musicians allows me to continue honing original material up to opening night. Leda Hoffmann’s Comedy of Errors (2018) featured Ben Yela and Luke Brotherhood as onstage multi-instrumentalists whose rehearsal work profoundly shaped how ideas eventually appeared in performance. Similarly, Joe Hanreddy’s Twelfth Night (2017) featured a dynamite cast of singers and instrumentalists whose work “[tied] together the rhythm and action of the comedy” through their performance of “contemporary acoustic sounds to the songs of Feste the Jester” (“Shakespearean Romance”). Musical collaborators like Mitchell Fergusson, Ken Sandberg, Elyse Edelman, Katherine Norman, and Colin Morgan and many others have left their fingerprints on each of the dozens of songs and musical moments that I have coordinated for Door Shakespeare. Gratitude.

I have had the privilege of composing commissioned music and lyrics for three original plays with Akron’s Ohio Shakespeare Festival, and new work with both the GWU Academy for Classical Acting (in partnership with DC’s Shakespeare Theatre Company), and Mary Baldwin University’s Shakespeare and Performance graduate program (partnered with the American Shakespeare Center).  Each of these experiences has pushed me creatively, but the opportunity to develop new compositions within a designated rehearsal process and alongside collaborative actor-musicians at Door Shakespeare has taught me how I want to work. Writing music can be a solitary job, but making music—like making the plays that these songs support—belongs in the hands of a whole community.

I believe that effective composing is the art of finding the songs, and sounds, and lyrics that belong to a play, or an ensemble, or an event, then giving performers the greatest possible chance to sing the stories their project needs. My aesthetic is characterized by the uncompromising use of acoustic instruments played by visible onstage performers whose bodily co-presence with audience members creates communities among spectators yearning for intimate theatrical connections. Working at Door Shakespeare has provided me the perfect laboratory to develop these theoretical and practical beliefs since the theatre asks for specificity and clarity in reaching an audience that is never more than an arm’s length away from the performers. Composing for performances beneath Björklunden’s incredible maple tree has pushed me to develop my composition and music direction at an immediate and practical level that I plan to continue using in my post-graduate life as a theatre scholar and practitioner. The weeks leading up to a Door Shakespeare season involve work and chaos: caffeine and revisions. Mostly, though, they involve gratitude.