Shake It Up Saturdays 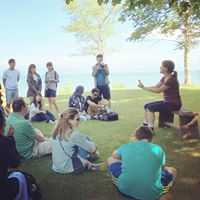 Join Door Shakespeare for a casual preshow gathering with activities designed to introduce patrons of all ages to William Shakespeare and Henry V. We’ll review the characters of the play and take a look at the plot in order to have a better understanding of the story and enhance the theatrical experience. Designed with families in mind, Shake it Up Saturday includes activities to help get the wiggles out before the show begins. Advanced registration required. Call 920.839.1500 to register and confirm dates and times.

Russ Bickerstaff, of the Shepherd Express, recently attended Shake it up Saturday. Read highlights below from his blog, The Small Stage.

“Theatre is universal. If it’s done well, there’s no reason that it shouldn’t be accessible on some level to everybody.
Door Shakespeare does a remarkably good job of drawing in the tiniest theatergoers with a Saturday pre-show program called ‘Shake It Up Saturday.’ The intimate outdoor theatre has 5:00 p.m. Saturday performances of Henry V. An early 5pm show is great for families.
Door Shakespeare Managing Director Amy Ensign does an admirable job of bringing the complexities of Henry V to life. The kids played with slips of paper assembling an ordered synopsis and addressed various aspects of the play. My daughters were particularly amused at the idea of France sending a king of England a chest full of tennis balls to mock him.

The specifics of the outdoor production were also of interest. It is explained to the kids that there are two opposing teams in the play: one in red and one in blue. Actors play counterparts on both teams based on cleverly simple costuming. The basics of this are brought to the kids via props and costuming. They take turns choosing items, creating characters and improvising interactions between them.The lessons from the pre-show workshop are brought into the theatre. Henry Vdirector, (Matt) Daniels, has chosen to allow aspects of the backstage atmosphere to be visible onstage in the narration-heavy spirit of Shakespeare’s script. This semi-visible backstage is a great introduction for the younger theatergoers.  My oldest daughter was given a checklist of classic lines from the play to listen for. The connection between script and spoken word seemed particularly interesting to her.

Shake it Up Saturday is FREE and open to the public. Registration is required. Please call 920-839-1500 or email info@doorshakespeare.com to register.

Thank you to our Shake it up Saturday sponsors, Alice and Bob Chrismer!